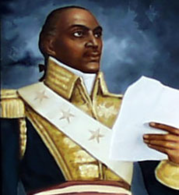 The first hero of Haiti was born in 1743 on the Breda plantation located on the heights of Le Cap. His roots have been traced back to Africa, where his father was the son of Gaou Guinou, a king of the Aradas Tribe. As a child, he was so frail and delicate that he was not expected to live. Nevertheless, born with a natural strength of character, he hardened his body through severe and rigorous exercises such as riding and swimming. He distinguished himself so remarkably that he was made coachman, then a steward of all the livestock on the estate of his master, Bayon Libertat. As an adult, he learned to read and write with the help of his godfather, Pierre Baptiste, an old free negro. Toussaint Louverture acquired a passion for books and read the writings of famous authors such as the Philosophical and Political History of the Indies by a French priest, Abbé Raynald, from which he was struck by the prophecy of a black chief who would free all slaves. From that time on, Toussaint held the secret mission of breaking the chains that were holding him and his black brothers in slavery.

Determined to achieve his goal, Toussaint joined the camp of the insurgents in 1791. He fought first for the Crown of Spain, and then on the side of France. He earned the name "Louverture," which means "opening," for as a French soldier, he won several cities in St-Domingue for France by fighting against Spain and England. In 1801, he was proclaimed the Governor-for-Life of St-Domingue and declared the abolition of slavery in the colony. He administered St-Domingue with extraordinary skills and discipline, and was feared and respected by whites, mulattoes and blacks alike. He was a devout Catholic, who attempted to suppress voodoo and encourage Christian practices. in 1802, Napoleon Bonaparte sent an expeditionary fleet to restore slavery in the colony. Toussaint was defeated and arrested through treachery under the order of Napoleon who sought to restore slavery in St-Domingue. Toussaint was sent to France and jailed without judgment in the Fort de Joux prison, located in the icy mountains of that country. Incarcerated and separated from his family and friends, he died on April 7, 1803 of ill treatment, cold and humiliation.

Born at the Cormiers Plantation north of Haiti in 1758, Dessalines was a slave on the plantation of Duclos who ran away to freedom at the age of 33. He was the principal lieutenant of Toussaint Louverture and became the General-in-Chief of the Revolution of St-Domingue after the deportation of Toussaint Louverture. He was a gifted soldier and distinguished himself during several combats, especially at the Battle of Crete-à-Pierrot. There he launched a splendid call to his soldiers and boosted their courage by leading them to blow up the fortress rather than give it up to the French. He led the indigenous army into victory over the French army of Napoleon Bonaparte in the Battle of Vertières on November 18, 1803.

On January 1, 1804, he proclaimed the independence of the colony, which he renamed Haiti. The same day he was acclaimed Governor-General-for-Life of Haiti, and on September 2, 1804 he was crowned Emperor under the name of Jacques I.

Dessalines was assassinated in a revolt on October 17, 1806 at Pont-Rouge. He is remembered as the Father of the Haitian Nation and the Founder of the Independence of Haiti.

Henri Christophe was born in 1757 on the island of Grenada. He was an adolescent when he arrived in Cap-Francais in St-Domingue. In 1778, he fought as a volunteer in Savannah, Georgia, for the independence of the United States of America. He was only 21 years old. Henri Christophe, a lieutenant of Toussaint, who fought the army of Napoleon during the War of Independence, is very well known for his influence in the nothern section of Haiti, where he built monuments, palaces and forts.

He proclaimed himself King of Haiti in 1811 and created an atmosphere of discipline, work, and education in that region. He was feared and regarded as a man of steel. He carried an extraordinary vision of grandeur for the Haitian people, which can be seen in his accomplishments. Among his magnificent works are the Citadel, that carries his name, and the Sans-Souci palace, which, even in ruins, draws admiration.

Paralyzed by a stroke and faced with the weakening of his army, Henri Christophe took his life on October 8, 1820. He remains the most admired of Haitians for his genius and advanced vision of Haiti as a civilized and prosperous nation.

The "Founder of the Republic," Alexandre Pétion was born in Port-au-Prince in 1770, of a French father and a black mother. At 18 years of age, he became a soldier and was sent to France to study at the Military Academy of Paris. Jointly with Dessalines, he played a very important role in unifying blacks and mulattoes to fight together at the Independence War against the French army.

Pétion was elected President of the Republic of Haiti on March 9, 1806, elected again in 1811, and then in 1816 he was re-elected President for Life. He became the first President of Haiti. He designed the official flag and coat of arms of the second independent nation of the American continent. He also supported other countries of South America in their struggle to gain independence from Spain. After years of many hardships and challenges he confronted as a soldier and as president, Alexandre Pétion ill and tired died in Port-au-Prince on March 29, 1818.